The Internet of Things Just Got Easier to Use 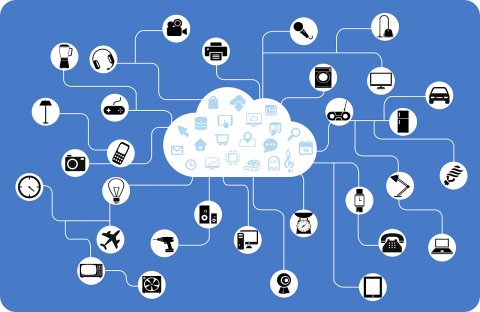 Instead of talking about data today, I’m going to talk a bit about process. In particular, taking advantage of several services that have popped up recently that can help you to automate some of your processes.

Have you ever wanted to have a way to automatically thank everyone who follows you on Twitter? These services can do that. How about turning on your lights when you arrive home? Yep, you can do that too. Track the hours you spend at a the office? Easy. Make sure your profile picture is always the same on all your social media channels? Can do.

These services allow you connect your stuff by facilitating a trigger and an action. Triggers can be anything from a time of day, to being tagged in a Facebook post, to a geofence based on your phone’s location. Actions, can be anything from turning on your lights, to sending an email, to inserting a row in a spreadsheet. Basically, triggers are things that happen that you can react to, while actions represent the things you can do in response. 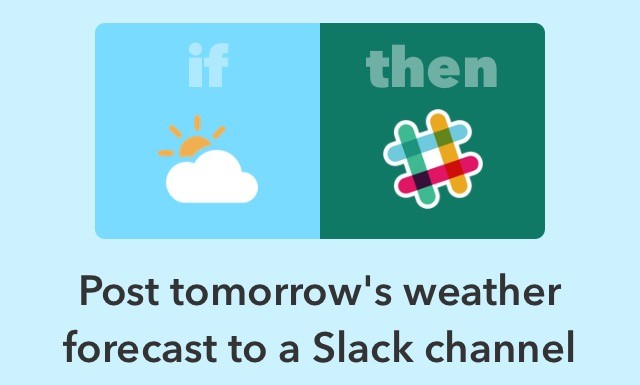 The first service I tried, and the most mature of its kind, was If This Then That (IFTTT for short). You can find it at IFTTT.com, in the Apple App Store, and on the Google Play store. IFTTT allows you to do some rather useful things by connecting your stuff. Oh, and it’s free! Here's how it works…

Recipes Applets have two parts: a trigger, and an action, and are built using the simple formula, If This Then That.

I have two widely separated switches in my house: one turns on the front lights, and the other turns on the side lights. The problem is that I almost always want both sets on, or both sets off. So I replaced both switches with WeMo™ wall switches, connected them to IFTTT through the WeMo Channel Service, and then built a couple recipes applets. The first says If [front light is switched on] Then [switch on side light]. The second says If [font light is switched off] Then [switch off side light]. Effectively, I now have one switch that controls both sets of lights. Cool. 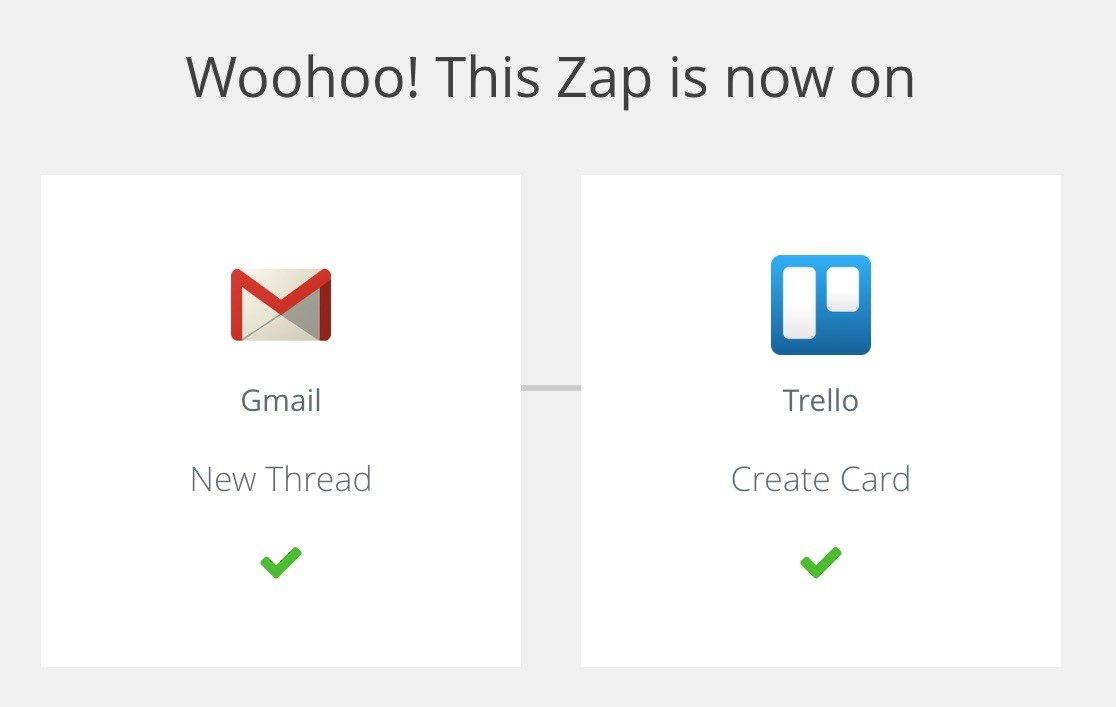 What if you wanted to do If This then That, and That?

Zapier (see zapier.com) works similarly to IFTTT, but instead of Recipes it has Zaps, and instead of Channels, it has Apps. Zapier, however, allows multi-step Zaps. That means you can do stuff like [When I get a new follower on Twitter ], [insert a row in a Google Sheets spreadsheet] and then [send a tweet to thank them for the follow].

What really sets Zapier apart is its ability to pick up new data along the way. For example, you could set up a zap like [when I get a new email], [search a Google Sheet for a match to the email address and retrieve a pre-configured message], and finally [respond with that message].

Unlike IFTTT, Zapier doesn’t have a mobile app, so there is no geofencing, and perhaps more importantly, it doesn’t (currently) connect to your physical internet enabled devices. 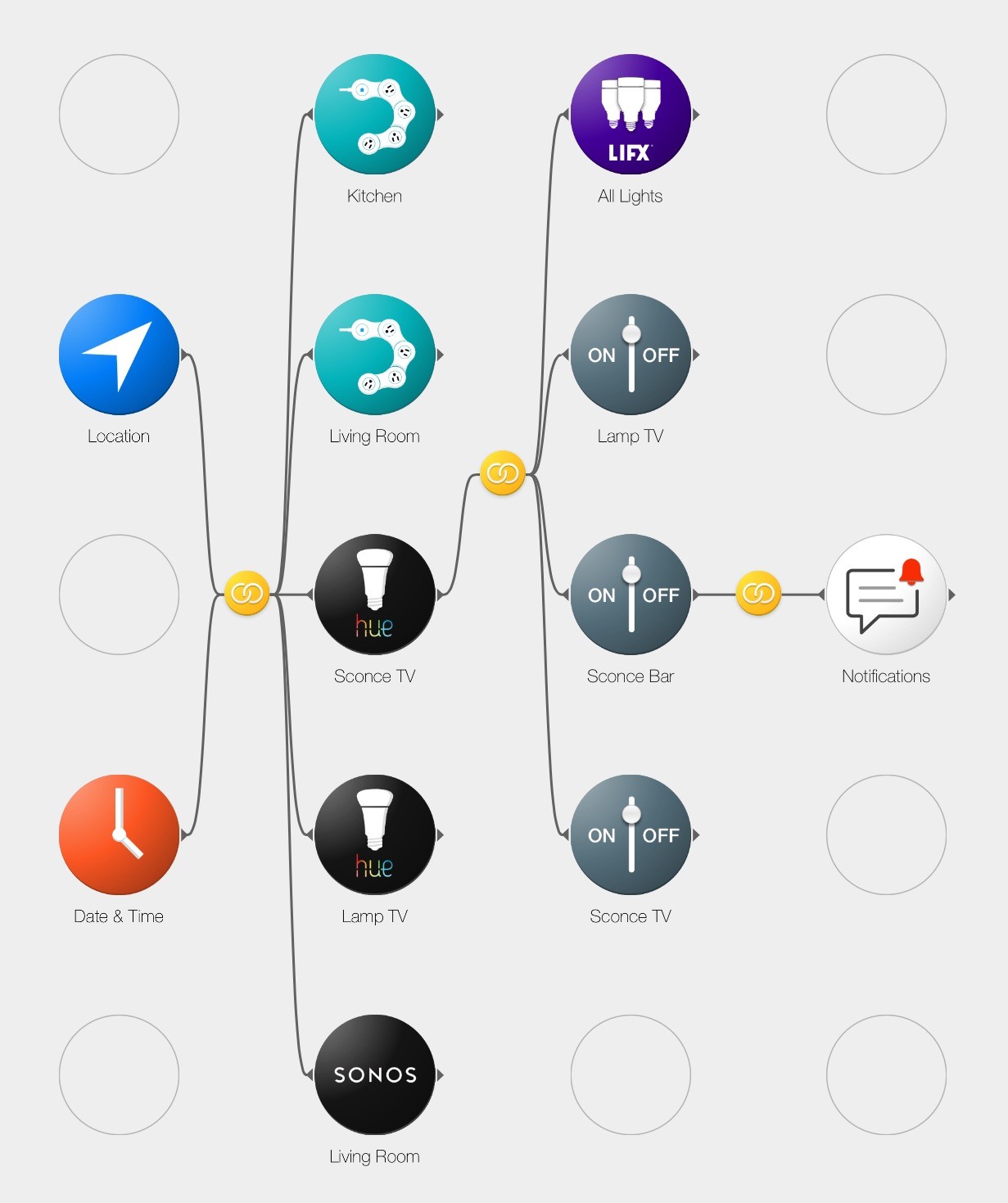 This is really great, but what if I want compound conditions? This is where Stringify ups the game. Oh, it’s free too. Check out stringify.com.

Stringify, which uses Flows instead of Recipes or Zaps and Things in place of Channels and Apps, adds the ability to have multiple Things involved in triggering a Flow. In other words, it can support If This and This, then That (and That).

I would like to have my lights turn on automatically when I get home. IFTTT can do this, but it will turn them on whenever I get home, even if it’s noon. With Stringify I can create a Flow to turn on the lights when I get home, but only if it’s also nighttime.

These flows can actually become rather complex, as you can see in the screenshot.

1)      It doesn’t have as many integrations as IFTTT. My WeMo switches, for example, are not supported.

2)      The only way to build flows is via an iPhone app. An Android version is apparently on the way, but for now you’re out of luck if you are not an Apple fan.

Why Choose Just One?

An interesting addition that both IFTTT and Stringify have is a Maker Channel/Thing (Zapier does not). Maker can send or receive messages over the Internet. This is intended to allow you to Internet enable your DIY projects (such as what you might build from a Raspberry Pi), but it can also be used to connect IFTTT and Stringify by having their Maker interfaces talk to each other. So I can have Stringify tell IFTTT to turn on my WeMo lights.

We’ve only scratched the surface here, but I hope you can see that there is a lot of potential to automate parts of your life. It’s not quite there yet, but the Internet of Things is still young, and still growing. New Channels and Things are added all the time so go have a look for yourself, and see what part of your life you can make just a little bit easier.

And it seems that Microsoft was just waiting for me to post this so that it could release it's own version. And... If This Then That just renamed recipies to applets. Sigh.